Opportunities and Problems with Digital Twins | Part One: Definition – What is This?

What are Digital Twins? 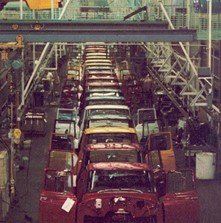 The original idea of a “digital twin” was a static configuration. The twins were the records in a database by serial number. They defined the “as-built” configuration of a complex product like a truck (or bridge, or aircraft…).

The idea is an old one. Mid-20th century, truck makers had a “line setting ticket,” which defined the configuration of the truck as it rolled down the assembly line.

See that paper taped to the door of each truck on the line? That’s the line setting ticket. It tells the story of how to build the truck. Which one gets a Detroit Diesel™? Vinyl seats?

Today this concept for Digital Twins records configurations into a database. It retains the data, which can be updated, allowing many kinds of assessments after the truck (or bridge, or aircraft) is in service.

Another definition comes from building a digital representation that mimics the behavior of the real-world object. These can be very simple, like the basic lookup table shown here.

But high degrees of sophistication can be achieved using Universal Modeling Language (UML). UML can produce twins which behave very much like their “real twin.”

Mimic twins can be tailored to focus on a functional goal; more about that in the next installments.

A topic of growing interest is the idea of using data from a population to train AI Twins. This can be tricky if each “real twin” information is insufficient to train the virtual twin. AI Twins are better suited for some functional objectives than others (more on that in part two). For very large populations, like millions of consumer wearables, AI Twins can be quite appealing.

In some ways, AI Twins may be Mimic Twins since we fit the historical data into a twin that mimics these prior data patterns.

Active Model Twins are more sophisticated simulations than Mimic Twins, even those built on UML. These can include cause-effect simulations with business rules, physics, and other mechanisms and may involve some degree of AI/ML.

Stochastic Twins include randomness and noise. If weather conditions matter to the “real twin,” then the digital twin might need to consider a statistical distribution of weather probabilities as we look into the future. Since uncertainty is everywhere, nearly any aspect of the virtual world can be improved when we acknowledge spans of possibilities. At Lone Star, we are big fans of stochastic twins. 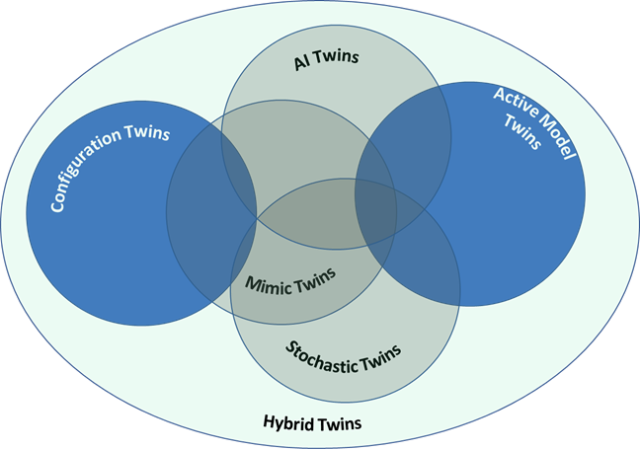 A configuration of growing interest is called “Hybrid Twins.” These twins are constructed using more than one of the topics described above. Often the author of a Hybrid twin started with one approach and then added other approaches to improve the accuracy, efficiency, or speed of the Digital Twin.

There are several ways to do this combination. When the configuration includes AI, and a hierarchy to control the hybrid twin, Lone Star calls this “Evolved AI™” since it begins to reflect the hierarchy of processes in a primate brain.

When we use our advanced AI methods, the term becomes “Deep Evolved AI™.”

What are Digital Twins Summary

Listed here are six different ways to approach building a Digital Twin. Are there other definitions? Yes, this is a young technology with many new ideas competing for attention. But these six definitions probably equip the reader to understand most of the diversity being deployed today.

Which one is best? The answer to that question depends on the use or function of the twin. That’s the topic for part two.

In part three, we will look at business problems (barriers & business models).