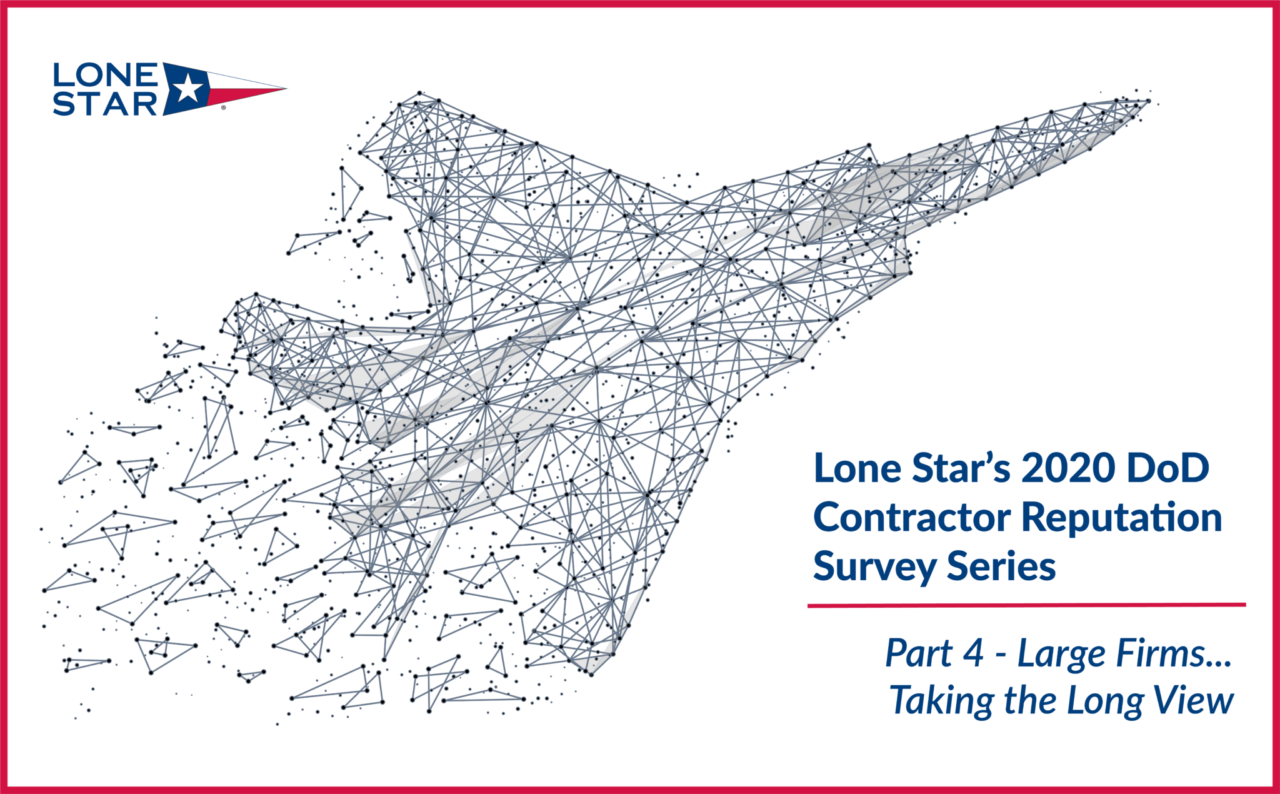 18 years of reputation survey data shows that the reputations of larger federal contractor reputations should be gauged over time, taking the long view versus in one singular moment. Changes in leadership, M&A, delivery failures and bad behavior can send large firms on a dramatic downward trajectory. Given time, most of these large firms climb back the through course corrections.

This is the fourth in a series of articles about Lone Star’s 2020 DoD contractor reputation survey. In June 2020, Lone Star obtained 117 survey responses from a pool of U.S. defense experts. This survey was one in a series of similar surveys our firm has conducted over many years. The survey series started in 2002 by a predecessor firm, Incucomm.[1]

This final installment on the 2020 survey looks at the eighteen-year span of this research, to draw some conclusions.

Readers of this research tend to focus on the largest federal contractor reputations. In particular, the net reputation ranking of large firms is the area of greatest attention. For 2020, that data is shown below. 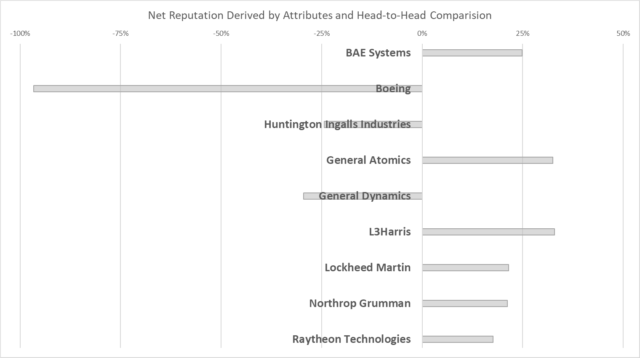 Boeing’s low performance is striking but hardly surprising, given the 737 Max, the tanker program, and other corporate challenges.

Looking at long term “trajectories” of federal contractor reputation is instructive. Warren Buffett famously said, “It takes 20 years to build a reputation and five minutes to ruin it.” That may be true of personal reputations, but our long-term reputation research suggests corporate repute degrades somewhat slower than Mr. Buffett suggests, and can rebound somewhat faster.

Eighteen years of reputation trajectories are shown above. These five firms illustrate how fluctuating reputation can be. But this only hints at the volatility. In some years, Boeing (dashed dark blue line) had been number one over all the firms we tested, including small firms. This was a notable achievement, considering that respondents consistently prefer smaller firms.

Raytheon (solid blue line) struggled with post-merger chaos in 2002. Respondents saw plant closings, layoffs, and failure to ship weapons after the 9/11 attacks. 2004 was worse; a scandal involving the chairman (plagiarism, etc.) drove the firm to publicly penalize him. Raytheon recruited notable board members of superb reputation, including Vern Clark, who was widely regarded as smart, thoughtful, and of impeccable integrity. Raytheon has been in the middle of this grouping since.

So, despite Buffet’s claim, reputations can be rebuilt in less than 20 years. But some aphorisms are true. Benjamin Franklin said, “it takes many good deeds to build a good reputation and only one bad one to lose it.”  Which brings us back to Boeing.

Boeing was #2 among the major contractors in 2002 when this series began. The 2004 survey occurred as a scandal peaked. In 2003, the U.S. Air Force had announced plans to lease 100 KC-767 tankers on a ten-year lease. By late 2003 allegations of corruption were being investigated, focused on Boeing and the Principal Deputy Undersecretary of the Air Force for Acquisition, Darlene Druyun.

Ironically, Boeing’s brand was apparently being damaged by the actions of McDonnel Douglas alumni, (Boeing had merged with that firm). The illicit relationship may have existed for more than a decade before the scandal broke, and long before the firms merged. Even so, in 2004, Boeing was probably saved from being in last place thanks to the actions of Raytheon’s CEO. Like Raytheon, Boeing took strong actions to address the issue.

By 2009, Boeing had the best reputation among the major firms. Now Boeing is known for some of the strongest ethics rules in the world. But, troubles with the 737 Max, the depressed air transport market, and a new form of tanker problems (again) has pushed Boeing far down our reputation list (again).

Finance and Business vs. Mission and Technology

While scandals can quickly damage a firm’s stature, years of research suggests other factors also drive reputation.  Failing at any one thing can create grave damage; good reputation is more than avoiding terrible things. It a result of superior performance across a balanced scorecard. 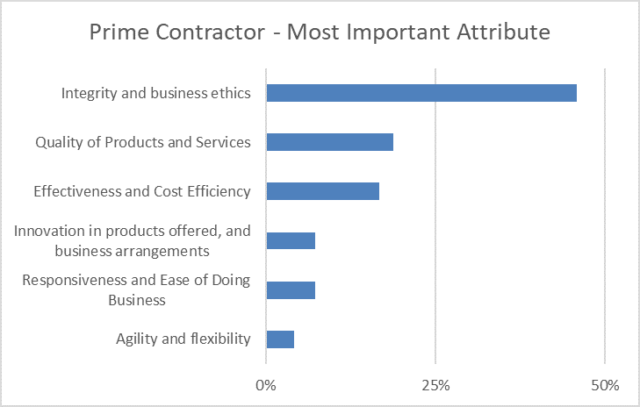 A recurring theme in our research is the damage from elite finance professionals and administrators. The leaders of defense and aerospace firms during the cold war were mainly engineers, technologists, and experts on the missions they served.

By the 1990s a push for “MBA-style” management took hold. That style does not always include the factors which our respondents say are important attributes.

Professional management has helped some firms. Consistent financial excellence has probably been a factor in Lockheed Martin’s consistently high rankings. Marillyn Hewson, Lockheed Martin Executive Chairman, has a background in business and economics, not aerospace engineering. Yet she has impressively balanced performance in the company through the turmoil of sequestration and the F-35.

The nature of large aerospace and defense firms is to be process focused. But processes in product management (e.g., CMMI) and vendor management (e.g., slow payment terms) are all associated with reputation damage. Process discipline may improve consistency, but this alone is not excellence.

Broadly, our research suggests the “MBA-style” is more likely to destroy a federal contractor’s reputation, than it is to build it.  Examining the background of corporate leaders, we found a correlation between negative reputation and “MBA-style” management. In prior years we’ve applied other tests, such as the days payable (how fast vendors are paid) and reputation. Financial engineering may suggest paying slower is a way to generate cash, but it degrades reputation. The question then is whether this enhances shareholder value, despite reputation damage.

Our research shows lower-tier suppliers impose a “stupid tax” on primes they deem to be difficult. In MBA terms, the total cost of capital can be quite high, and perhaps not the most efficient way to raise cash. Of course, reputation is no insurance against externalities. Sequestration, air transport markets, and other factors can change a firm’s valuation, regardless of a good name. However, over eighteen years of research, many measures of shareholder value seem correlated to reputation.

Taken to extremes, finance and process-driven executives damage reputations, and they can damage shareholder value as well.

None of the five large firms discussed in this article were among the top 10 firms in our federal contractor reputations ranking. Eventually, they may return to the top 10. But it is ridiculously hard to be consistently good at serving customers, shareholders, and employees. It seems safe to predict the future will hold more ups and downs for some of these large firms.

[1] Incucomm, Inc, is now a subsidiary of Lone Star.

You can review the 2020 DoD Contractor Reputation Survey blog series parts 1, 2 and 3 HERE.

The complete “Lone Star Analysis 2020 DoD Contractor Reputation Survey Report” will be available soon. To request a copy of the full report, please send your request to: lsa-marketing@lone-star.com.