In addition to contractor reputation, the survey explored the DoD’s digital transformation and CMMC. In general the findings show that there is a sense of pessimism about DoD’s digital maturation/transformation. Additionally, there is little optimism regarding CMMC (Cybersecurity Maturity Model Certification)

This article is the third in a series on Lone Star’s 2020 DoD contractor reputation survey. In June 2020, Lone Star obtained 117 survey responses from a pool of U.S. defense experts. This survey was one in a series of similar surveys our firm has conducted over many years.

DoD’s digital transformation has many facets. Moving information and processing to the Pentagon’s Joint Enterprise Defense Infrastructure (JEDI) cloud computing environment is one example. Complex networked kill chains and weapons is another. Databases and analytics for logistics and sustainment is still another part of the trend. And, of course, the use of Artificial Intelligence (AI) for a wide range of applications, including processing huge flows of intelligence information is frequently cited.

Part of the transformation is cybersecurity. The most visible effort in this category is DoD’s Cybersecurity Maturity Model Certification or CMMC.

One goal of the 2020 survey was to get a sense of how our respondents saw DoD’s progress. No transformation is easy. The “Revolution in Military Affairs” of the Cold War had notable failure and challenges, in addition to notable successes. We wondered how this transformation was seen. 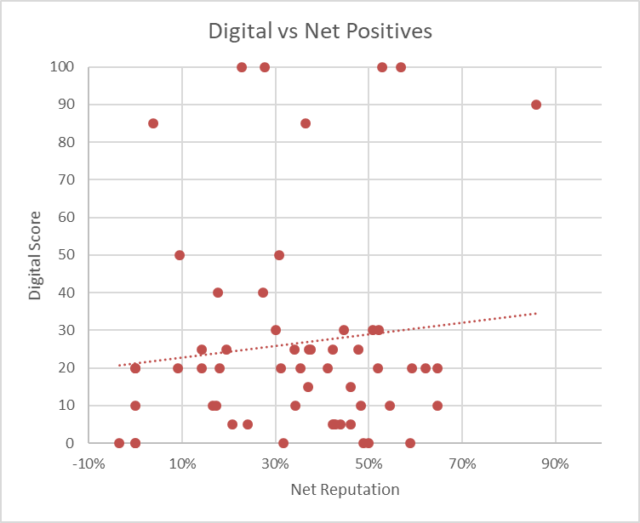 We assigned a “digital” score to each of the 57 firms in our survey, representing the rough ratio of digital content in each firm’s business.

Shown here, we see there is some (weak) correlation between the “being digital” and positive reputation. Several of the top-rated firms were highly digital.

However, DXC Technology inherited the business and brand reputation of the Computer Sciences Corporation, which was rated highly digital, but also had one of the worst brand reputations tested.

Being digital may help, but clearly does not assure a good reputation. Generally, solutions and software firms did better than IT services firms.

How DoD Fared as a Smart Customer

The survey asked five questions on DoD’s digital journey. Respondents reacted to questions posed in form of assertions. Respondents could agree or disagree on a five-choice Likert scale, from “Strongly Agree” to “Strongly Disagree.” There were 95 responses to this portion of the survey. 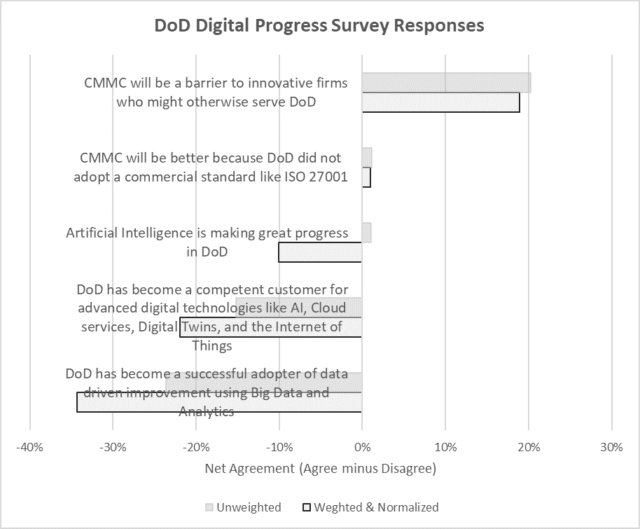 Respondents were not confident DoD’s digital transformation was on track:

This pessimistic view of DoD’s digital journey led to questioning prior initiatives. Critics have charged that past DoD digital “innovations” such as CMMI, Ada, the 1553 bus, and Mil-Std-1556 served to only isolate DoD from mainstream technology.

These critiques are largely untestable, although some evidence might be offered for the performance, parts costs, and test set availability for 1553 compared to commercial bus and network standards.

We had seen two prior studies showing a negative correlation between Contractor Performance Assessment Report (CPAR) scores and CMMI level achievements. These studies were proprietary and were done several years ago.  But we decided to test this hypothesis and researched the CMMI level of each of the 57 firms in our reputation survey.

DoD and the services have made noteworthy progress in adopting digital technologies. Many successes over the past decade can be cited, in particular since the 2014 announcement of the “Third Offset Strategy.”

You can review the 2020 DoD Contractor Reputation Survey blog series parts 1 and 2 HERE.

The complete “Lone Star Analysis 2020 DoD Contractor Reputation Survey Report” will be available soon. To request a copy of the full report, please send your request to: lsa-marketing@lone-star.com.