When it comes to Covid-19… your 401k will probably get sicker than you ever will.

Prediction – For the United States, with interventions Covid-19 impact will be economic, driven by public reaction and probably far out of proportion to actual health risks. In the U.S and E.U, the Corona Virus, or Covid-19 will be both less contagious and less deadly than first thought.

Prescription – Basic interventions should provide significant protection for most Americans and Europeans. Wash your hands, use social distancing.

Why this blog now?

Since the early days of the novel Corona Virus outbreak, we’ve received dozens of requests to do analytics on Covid-19 and to write something about it. Until now, we’ve deflected those requests. But now it might be useful to add our assessment. The reasons to publish now are:

How Humans Think About Risk and Uncertainty

Why are so many people so concerned? Is it based on realistic understanding of the risks? The answer is “no” because no one really understands the risks. Epidemics are very tricky things to understand. A century after the 1918 flu epidemic we still can’t confidently “understand” it by several important measures. (So, it should be no surprise that we don’t fully understand Covid-19.) But humans don’t like uncertainty. It feels like a surprise when we can’t get our questions answered.

Perhaps more important than “not liking” uncertainty, humans are unable to process uncertainty. We are “predictably irrational” when faced with uncertainty. One of our strongest irrational biases is the response to potential loss. There is no loss as great as the loss of life (yours, your loved ones). So, it makes sense humans will overreact to the uncertainty of a new disease. Just knowing about this bias doesn’t change our behavior very much. It is deeply wired into our brains it seems.

So how tricky is it to understand epidemics? Very.

There is no single measure of how “bad” a disease is. And any one measure is tricky to nail down. In a 2008 paper researchers from prestigious institutions used “attack rate” of an epidemic as an important measure; what percentage of a population suffers symptoms? It ranges from about 47% to less than ½ percent, depending mainly on how a society reacts. That’s a factor of about 100; a lot of uncertainty. 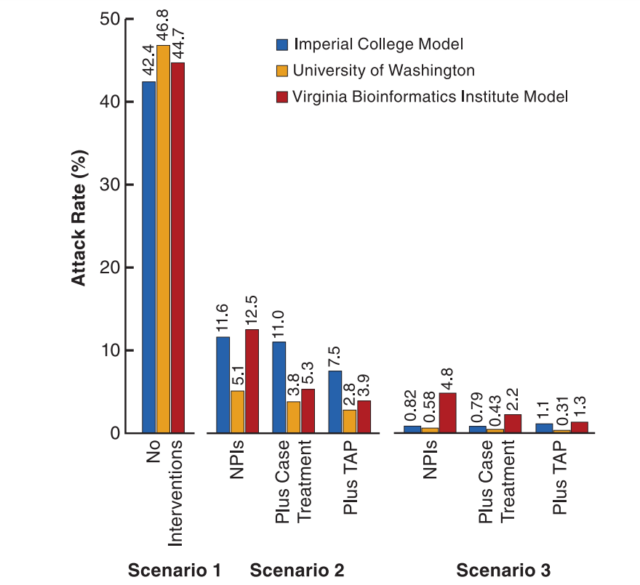 What does 2008 Epidemic Study Mean Now?

This blog is already too long. There’s too much to unpack here, but the important messages are:

2 – “Nonpharmaceutical interventions (NPIs) are HIGHLY effective for virus epidemics. These are simple things like letting sick people stay home, and some degree of “social distancing.”

Will I catch it? Will I die?

Readers probably haven’t seen “attack rate” as a measure in the press. It’s more likely you’ve seen two other numbers, R0 and Mortality Rate. These deal with the two questions most people have; will I catch it? Will I die? Both of these numbers also defy precision.

We measure how easy or hard it is to catch a disease by R0 (or “R naught”); the basic reproductive ratio of a disease. R0 is the reproduction rate at the start of an epidemic before anyone has built up resistance. As a disease like chicken pox sweeps through a preschool more children become immune. Soon there are too few vulnerable kids left to catch the disease, so the reproduction ratio falls quickly as time goes on. When R drops below 1, the epidemic dies out.

So, how contagious is Covid-19? Most estimates, without intervention are in the range of R0=2 or 3, and perhaps as high as 4 or even 7, but these numbers are highly suspect. To most serious observers, the initial outbreak in China was poorly reported. We don’t really know how the disease progressed. Moreover, we do know early interventions were extremely limited and that “normal” life habits in Wuhan are unlike the “normal” habits of someone in Denver. How a disease spreads depends on the society. For the deadly Ebola virus, researchers found for Ebola epidemic, the R0 in Liberia was about 1.8, about 30% higher than the R0 of 1.4 in Sierra Leone, a similar nation. In the 1918 Spanish flu outbreak, different U.S. cites had different rates of contagion. Some cites (and the Army) did nothing to isolate infected troops.

A recent study currently in peer review suggests that, with interventions, Covid R0 is about 0.3. That applies to readers in the United States and in Europe, where we are in a very robust period of intervention. That would be a 10-fold reduction, if true. Estimating R0 with intervention deals with two kinds of uncertainty; the raw reproduction rate, and the effectiveness of interventions. But it is in line with the 2008 paper which suggests we should hope for even more help from interventions.

Since about 80% of the reported cases of Covid-19 are still in China at this writing, we should expect the R0 to be less in the U.S. and E.U., where we have better public health, and we were warned to act. You should care about the R0 in the society where you live. We should expect to see significant differences in different regions. As seen below, many diseases have a range of R0 values, depending on the setting.

The 1918 Spanish Flu helps illustrate how differences in living standards, society and nutrition matter. But that epidemic also shows that even aggressive contagion has limits. The best estimates are that less than 30% of the world was eventually infected. Suggesting Covid-19 might reach 70% as some have claimed requires extraordinary evidence, which can’t possibly be produced right now. 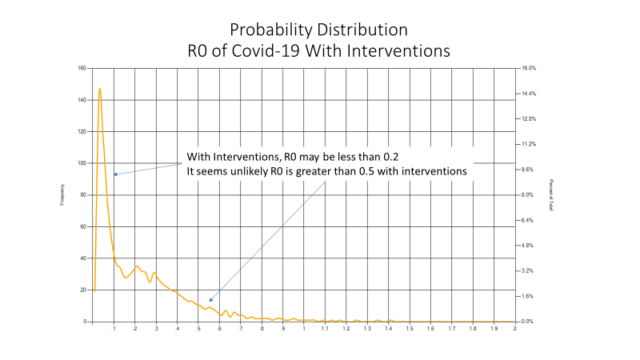 Should we believe that? It seems credible when we compare Covid-19 to more familiar contagions.

Perhaps the most important question is “will I die.” To answer that, we need to consider mortality rates. Here too, we should expect to see differences in each region.

Availability of health care is the most important predictor of mortality. In the early days of the Wuhan outbreak, many individuals were untreated. Don’t assume China, as a communist/socialist nation has socialized health care. Urban Chinese are required to pay for treatment or purchase medical insurance. A majority have insurance, but payment reimbursement rates vary from 50% to 80%. Most Chinese don’t have access to fully modern care or prompt treatment, and many can’t afford what is accessible.

So, fatality rates over 2%, reflect early and poorly treated cases, mainly in China. The New England Journal of Medicine published an editorial stating, “…the overall clinical consequences of Covid-19 may ultimately be more akin to those of a severe seasonal influenza (which has a case fatality rate of approximately 0.1%)…” Researchers in Europe are making similar suggestions. And, a look at the history of epidemics shows that early estimates of mortality are usually too high by a factor of 5 to 10. So, a mortality rate of much less than half a percent is a very reasonable estimate right now.

Aggressive interventions will reduce the spread of Covid-19, and good evidence suggests that is already happening. Mortality rates in the U.S. and E.U. should be low. Early mortalities are probably not a precursor of what we should expect from here.

What are We Doing at Lone Star?