There are plenty of fibs and outright lies in business. You might know the “Three Great Lies” with number three being, “the check is in the mail.” We say the “Fourth Great Lie,” happens when customers say they have all the data we need in good order. It’s never true, but most customers don’t know they aren’t right.

For a long time, we thought we didn’t need another lie on this list, but number five has appeared.

“Our platform is open”

In nearly every case, this is the fifth great lie. Vendors tell this lie with claims they offer:

The problem is these claims come from companies who (our customers say) are open like quicksand. Easy to get in, but hard to get out. Yes, they have open interfaces and APIs for getting your data in, but it’s a one-way door.

The Eagles’ song, Hotel California, was a 1978 Grammy Winner and has stood the test of time:

“Relax,” said the night man,
“We are programmed to receive
You can check out any time you like
But you can never leave.”

Like the “night man,” some companies are “programmed to receive” your data and money. Low-cost Proof of Value contracts, open interfaces, APIs, and other “open” features make it easy to “check-in.” But, like Hotel California, you can never leave; at least not with processed data or tools built on their platforms.

“Walled Garden” sounds nice but don’t confuse it with the sweet children’s story about a Secret Garden. Both seem like lovely places to be. But the children can leave their garden.

Any system can become a “walled garden.” Your investment always makes it costly to change. In data platforms, AI, and analytics, some vendors sell a Nasty Walled Garden. They hold your data and results hostage because they supply no practical way to connect to other systems. They only support open standards for import, not export.

Standards are critically important. Rail standards allow rail cars to roam freely. That’s what standards to. They are all connections, they promote free movement. That’s what you want for your data.

Phony “open standards” are an old trick. In the early days of mobile phones, you might have a phone made by one vendor to a standard like GSM, but you could not always get it to work if a GSM base station came from a different vendor. Base station vendors locked you to their phones.

“Open” only has meaning if the customer can easily connect across vendors. So, Lone Star has long supported the SIPmath™ standards as an antidote to walled gardens. The world increasingly wants to connect the analytics, modeling, and simulation work of diverse groups. We believe the SIPmath standard from Probability Management fills an important void. Lone Star supports open systems in other ways, but this is one you can write into a contract.

But you might still wonder, “so what?” The “so what” is open systems. SIPmath 3.0 data can be used with free Excel executables and other freeware from the website. One “so what” can be seen in the work of Max Disla of the Defense Contract Management Agency (DCMA). He incorporated data sets collected by DCMA into SIPmath representations. 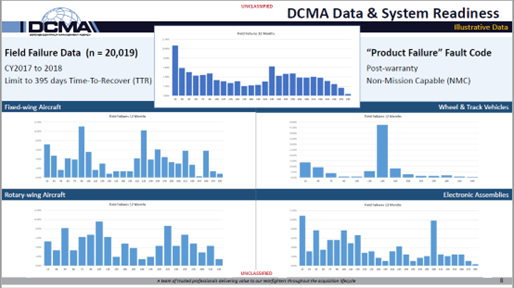 What classic distribution (named for a dead mathematician) would you use for any of them? There simply isn’t one. But the SIPmath 3.0 standard accommodates it very well.

There are other benefits. This failure data from DCMA includes proprietary data from industry and classified data about military systems. But the SIPmath 3.0 representation drops the original source data. This distribution is an abstraction of the original data and, therefore, less vulnerable to exploitation. There are other important benefits you can read about here.