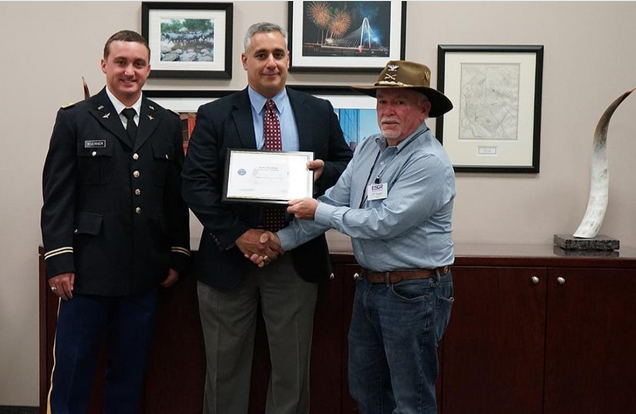 Lone Star Analysis and it Director of Prescriptive Analytics Tom Abraham received the Above and Beyond Award and the Service Member Patriot Award, respectively, from the Employer Support of the Guard and Reserve (ESGR).

Lone Star Analysis, a Dallas-based specialist in leading-edge predictive and prescriptive analytics solutions, and its Director of Prescriptive Analytics Tom Abraham received the Above and Beyond Award and the Service Member Patriot Award, respectively, from the Employer Support of the Guard and Reserve (ESGR).

Lone Star has a long history of working with government and military agencies, and understands the need to be committed to those who serve. That commitment showed true with Lone Star Analyst Lt. Weston Woerner, the nominator. Abraham and Lone Star received their respective awards due to their efforts supporting Woerner as he prepares to become an Apache Longbow pilot.

“Over the past five years, around five percent of our employees have been reservists and another 20 to 25 percent are veterans,” said Steve Roemerman, CEO, Lone Star Analysis. “The difference they make at Lone Star is only outdone by their contributions to our country and its freedom. Supporting Weston throughout his journey has been extremely rewarding, and we look forward to watching him succeed from afar. We’re truly honored to receive his and ESGR’s recognition for our support.”

The Patriot Award, given to Abraham, recognizes individual supervisors for support provided directly to service members or their families. This often translates to supervisors being flexible with and supportive of reserve members through various means including flexible scheduling, time around deployment, allowing leave of absences and helping assist the service member’s family.

The Above and Beyond Award, given to Lone Star, is an award that is eligible to companies who have had supervisors receive the Patriot Award. It is given in limited quantities to employers who have exceeded the legal requirements of the Uniformed Services Employment and Reemployment Rights Act by providing their National Guard and Army Reserve employees with extra benefits such as recuperation of pay to offset lost wages, expanded health benefits and other additional support beyond the scope of the act.

ESGR, a Department of Defense program that distributes these awards, was established in 1972 to promote cooperation and understanding between Reserve Component Service members and their civilian employers, and to assist in the resolution of conflicts arising from an employee’s military commitment. ESGR helps foster a culture in which all employers support and value the employment and military service of members of the National Guard and Reserve in the United States.

Lone Star Analysis is a Dallas-based predictive and prescriptive analytics specialist enabling customers to make smarter decisions faster by leveraging data and insights to provide foresight and enhance the decision-making of its customers. Lone Star’s TruNavigator® and AnalyticsOSTM software programs provide transparent, auditable and explainable solutions for clients. Additionally, Lone Star applies the right combination of data, people and processes to get results with its 15 years of experience and more than 800 subject matter experts, across several industries, including aerospace, defense, energy, logistics, manufacturing and transportation.